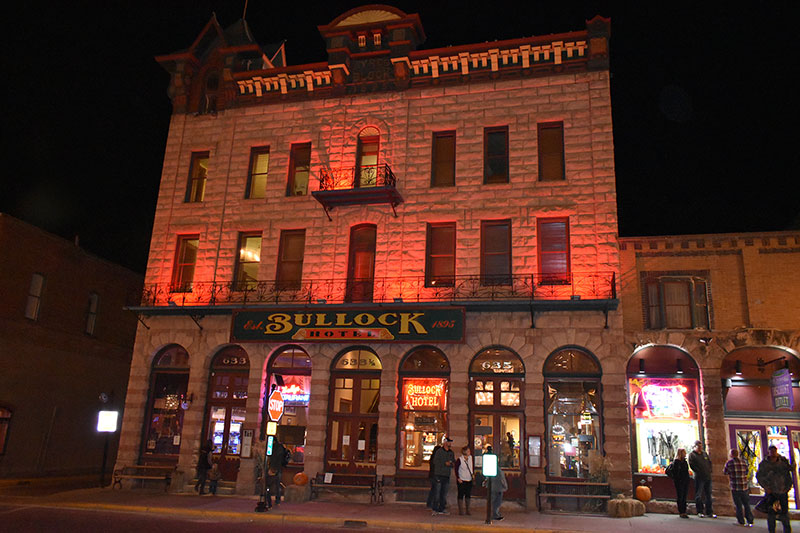 The Bullock Hotel is located on Main Street Deadwood, and was built by Seth Bullock in 1894 after his and Sol Star’s hardware store was once again burnt to the ground.

Seth Bullock and Sol Star were keen entrepreneurs and when the gold rush came to the Black Hills they saw a great potential and loaded up their wagons with much needed supplies and headed to Deadwood. They arrived in Deadwood on August 1, 1876, one day before Wild Bill Hickok was gunned down.

They promptly went to work building their hardware business. After the great fire of 1879, Bullock and Star rebuilt their business. After a fire in 1894, the only part of the structure that remained was the brick warehouse known as a fireproof. Bullock saw an opportunity to build and decided to build a luxury hotel. The hotel originally had sixty-three rooms with a bathroom on each floor. The hotel also boasted a restaurant that sat one hundred people.

Seth Bullock was not only an entrepreneur, but Lawrence County’s first sheriff. It was said Bullock never once had to use his gun in the performance of his duties. This was a rare accomplishment in Deadwood’s early years let alone western law enforcement. It was said Bullock had an intensity about him and a stare that could diffuse the most intense confrontation.

In 1884 while riding his ranch property near Belle Fourche he came across three scruffy looking characters. Bullock questioned them about their presence on his ranch property, and he learned two of the hard looking men were lawmen transporting a prisoner to prison. One of those lawmen was a future president of the United States, Theodore Roosevelt. This chance meeting started a life long friendship between Bullock and Roosevelt.

When Roosevelt died in 1919, Bullock was instrumental in having a monument erected in Roosevelt’s honor on what is now Mount Roosevelt. Bullock was gravely ill as well and soon followed his friend in death. Bullock died September 23, 1919 at the age of seventy at his home in the Ingleside district of Deadwood, not room 211 of the Bullock hotel as most believe. Bullock had secured a plot above Mt. Moriah that had a direct view of Roosevelt’s monument.

BHPI was invited by management of the Bullock Hotel to investigate the paranormal activity that has been experienced in the hotel over a period of several years. In fact, the Bullock Hotel staff embraces the stories of paranormal occurrences so much that a book has been placed near the front desk for anyone to document their experiences.

We were aware of the many claims and knew there is a long history of hauntings that have been reported. One of those claims is many have seen what they believe to be Seth Bullock’s apparition walking the hallways of the hotel, and some have even claimed to have captured Seth’s likeness in photographs. Another interesting claim is a little girl by the name of Sarah is often seen running around in the basement where Seth’s Cellar is located. Employees and guests have reported shadow figures, disembodied voices, apparitions, items moving, and being touched.

Since this is a working hotel, some of the rooms were occupied by guests and the main floor that has been converted to a casino remained open. Because it was snowing and the off season for tourists, the hotel was not busy. Although concerned about contamination, we proceeded to set up our equipment in the basement where a bar, Seth’s Cellar is located. We were given free access to rooms that were not occupied, and started our investigation.

While investigating another room, we opened the adjoining doorway and occupied both rooms. While asking for a sign, a drinking glass was forcefully knocked over. We tried to debunk the falling glass, but could not. We continued our investigation in the room and one investigator using a digital video recorder with over sixty minutes of battery life left asked for the spirits to give a sign. Within seconds the video recorder completely shut down, and could not be turned on. After the investigation the investigator advised the battery was completely drained.

While in one of the rooms an investigator saw a shadow under the door coming from the hallway. The shadow lingered at the door and the investigator went to the door and opened it expecting to see someone standing outside the door. However, when he did open the door, no one was there. This happened to several investigators over the course of the investigation.

Later in the night two investigators were sitting at a table in the basement when the table shook. Neither investigator moved. When they tried to recreate the movement, they could not without it being obvious.

After about six hours of investigation we collected our equipment and began the process of analyzing the evidence. We were surprised when we obtained several electronic voice phenomena (EVP) recordings.

This EVP was captured in Room 314

This was captured in the basement. We could not determine its source, but does sound like a garbled voice.

This EVP was captured in the Basement. Sounded like she was saying “That’s old.”

This EVP was captured in one of the rooms. No one was in the room nor were there any guests in this section of the hotel. It sounds like a piece of furniture being moved.

This EVP was captured in the basement.

This EVP was captured in the same area of the hotel as the Furniture EVP. It sounded like wood being sawed.