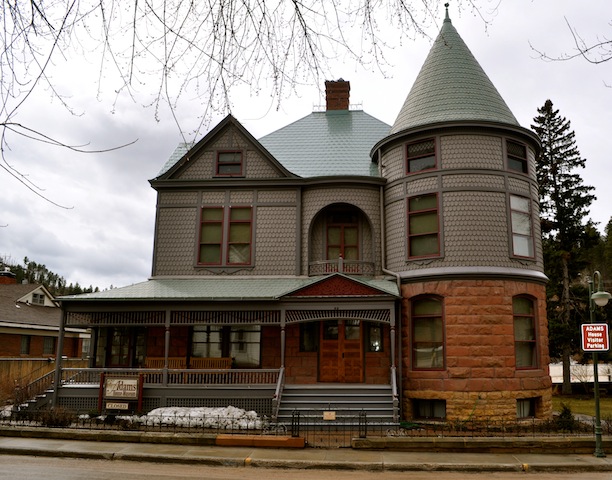 The Historic Adams House Museum located at 22 Van Buren Street, was built by Deadwood entrepreneur Harris Franklin in 1892. It is reported in local newspapers as one of the finest in Deadwood and west of Omaha. Harris sold the home to his son Nathan in 1905 for one dollar.

In 1920, W. E. Adams bought the home. Adams and his brother arrived in Deadwood in 1877. Adams tried his hand at gold mining while his brother opened a grocery business. Adams found gold mining was not working out and went into business with his brother. Adams eventually took over the business and grew it into a successful grocery wholesale business. W. E. Adams became one of the richest men in Deadwood, but tragedy struck, Adams wife Alice diagnosed with cancer traveled to California to be with their daughter Helen who was about to give birth. While there, Alice passed away. The stress caused Helen to go into premature labor–she gave birth to a girl. The stress was too much and Helen died. The baby also named Helen lived for only a few hours. W. E. Adams had lost his family in less than forty-eight hours.

A couple years later Adams met Mary Mastrovich Vicich and they were married. This coupling started tongues wagging in the Deadwood and Lead communities. Adams at the time was 73 and Mary only 29.

W. E. Adams had become a rich man over the years and he saw the need to give back to the community that had given him so much. He donated the money for a museum which was completed in 1930. The Adams Museum is a popular museum to this day.

On June 7, 1934, W. E. Adams suffered a stroke. He was brought to his home where he died on June 16, 1934. His body lay in state in the museum he was instrumental in having built and later buried in the family plot in Pasadena, California.

Adams left his wife Mary the home, but she could not find herself living alone in the home. She closed up the house and moved to California. Every year she would travel back to Deadwood, but she would never stay in the home. Instead, she elected to stay at the Franklin Hotel. When asked why she would never stay in the home, Mary claimed it was haunted. Whether this was a clever plan devised by Mary to keep trespassers away or not, it seemed to work. The home remained unmolested until she sold the home in 1987.

At this time the home was turned into a Bed & Breakfast. In 1992, the city of Deadwood purchased the home and continued running it as a B&B until 1995. The home was left in disrepair and in 1998, the city decided to restore the home. In 2000, the Adams House opened to the public as a museum.

BHPI was contacted by Mary Kopco, Executive Director of Deadwood History who told us that staff and guests were experiencing paranormal activity in the Historic Adams House and Museum. Kopco told us that she has also witnessed first hand this activity and believes she has actually seen W. E. Adams apparition in the house.

Kopco said she came to work for Deadwood History in the capacity as Adams Museum and House director in 1995. She happened to live next door to the Adams House and on several occasions noticed lights on in the house after it had been closed for the night. She would enter the home and ensure no one was in the house and turn off the lights and then send messages to staff in the home to be more diligent in turning off the lights. The staff claimed that every light was turned off and they had no explanation as to why the lights were still on.

Kopco told us on one occasion she was looking out a window toward the Adams House and saw a shadow of a tall thin man pacing back and forth in front of an upstairs window. She said that the home was closed at the time and no one should be in the house. She told us she knew she should call the police, but her son told her, “No mom, that’s just Mr. Adams, he likes you.” Kopco said she entered the house, but found no one there. She told us all of the doors and windows were locked.

Kopco also told us about a claim she heard from an employee of the house when it was a B&B. This employee told her that she was standing out back smoking when she turned to see a tall older gentleman staring at her. The employee said she turned to put out her cigarette and when she turned back the man was gone. Kopco said the employee didn’t think anything of the incident until she saw a picture of W. E. Adams and realized that was the man she saw.

We spoke with the curator, Hayley Chambers who admitted that she has had some interesting experiences in the house. Chambers said she spends a lot of time in the home cleaning and restoring artifacts. On several occasions she claimed she would hear what sounded like several people speaking in different parts of the home. When she would go investigate, she would hear the talking coming from another part of the home. Other times, she would get the feeling she was being watched.

We spoke to a docent who told us that he was giving a tour in the home and experienced something strange. He told us that he was standing at the top of the stairs leading from the kitchen talking to a small tour group. He said he heard footsteps walking up behind him. He thought it was another docent coming to assist, but when he turned no one was there. He said he turned back to the group and a lady at the top of the steps said she had heard the steps, too.

On another occasion, this docent told us he was giving a tour and was upstairs. The people on the tour walked into the turret bedroom and asked him how he managed to arrange the rocking chair to move. He told us he entered the room and the rocking chair across the room was rocking back and forth. As they all watched, the rocking chair suddenly stopped rocking as if someone had reached out and stopped its movement. He had no explanation as to how this could have happened.

After hearing the claims of activity, BHPI conducted several investigations at the Adams House. During each investigation we conducted, we experienced what sounded like talking coming from upstairs. We proceeded upstairs to locate the voices, but once upstairs it sounded like the voices were downstairs. We contacted our command center to determine if someone was outside the house talking. We learned no one was around the house.

On another occasion, we were walking up the steps from the kitchen to the second floor when an investigator heard footsteps coming up the stairs behind him. He turned to find no one on the stairs. The investigator had a video camera and on playback, you can clearly hear three footsteps on the audio. We were unable to debunk this experience, and found it compelling since a docent experienced the same thing on these very steps.

After our investigations, we analyzed our evidence and we obtained several interesting EVPs. Based on the history of reported paranormal activity and our captured evidence, we do believe the Historic Adams House and Museum is paranormally active.

When we captured this EVP, no one was in the house.

An interesting response to our whistles.

This EVP was captured in an upstairs bedroom.

You can hear a child’s voice over the top of our investigator.

We could not debunk this experience. The investigator told us that he actually thought someone was there. He was surprised to find he was the only one on the stairs.