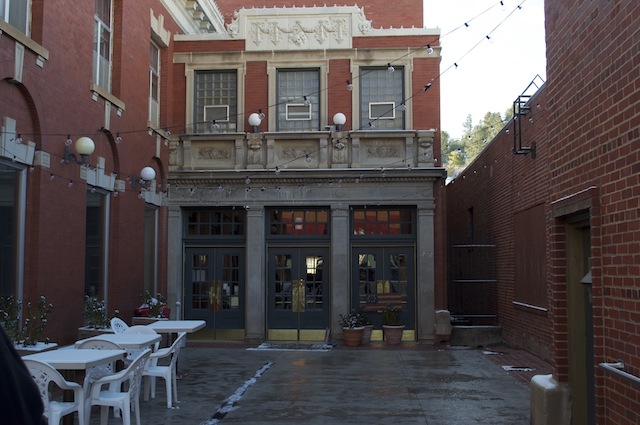 BHPI was contacted by Sarah Carlson, executive director of the Historic Homestake Opera House located in Lead (Pronounced Leed), South Dakota. She indicated that some of the actors in plays and staff have witnessed strange activity.

We spoke to a few witnesses who told us while preparing for plays, they would see people walking past the doorways leading into the theater. These witnesses knew they should be alone, and when they went to investigate found no one in the building. Other witnesses claim that when they enter the basement, they get a feeling of being watched. Some have even claimed to have witnessed shadow figures. They also claim that at times they notice movement behind them on the stage. The dressing rooms located below the stage are also active, and witnesses claim to hear sounds of voices and movement coming from this area when no one is there.

The basement of the Opera House at one time housed a swimming pool that has now been covered with concrete to make room for offices and storage. However, the pool itself remains and those who have been in this area have witnessed what looks like an apparition of someone floating as if swimming.

Through our research we learned that Phoebe Apperson Hearst, the widow of George Hearst owner of the Homestake Mine along with the mine superintendent Thomas Grier conceived of the idea of building an opera house for the hard rock miners and their families.

In April of 1984 tragedy struck when fire struck the grand structure. Many thought this was the end of the Opera House, but like a great phoenix rising from the ashes the Opera House was saved by Lead residents and is undergoing renovations.

The Opera House was one of the larger venues BHPI has investigated. With claims of activity taking place on each floor, we had to determine the best placement of our equipment. We decided to concentrate our efforts on those locations within the Opera House where witnesses reported the majority of the activity.

Meanwhile, the investigators in the pool area were experiencing some strange activity that they could not debunk. One of the investigators was using a thermal camera and captured what could best be described as a cold spot moving away from an investigator then disappearing. We tried debunking this video by recreating the conditions with flashlights and IR cameras, but nothing we did could recreate the anomaly that was captured.

The investigators on the stage realized that some of the activity reported came while people were on stage entertaining. Lucky for us, Sarah Carlson, Executive Director of the Historic Homestake Opera House was with us and she volunteered to stand on stage and sing. As Sarah sang, investigators noted several strange sounds and shadow figures at the back of the stage.

The investigators at first thought the stones might be falling from the ceiling, but the ceiling of the pool is made of metal. We searched, but could not find a reasonable explanation for this incident.

Once the investigation came to a close we took our evidence and began analyzing our audio and video. We were surprised that we did uncover some interesting EVPs and video evidence.

We revealed our findings to the board of directors of the Historic Homestake Opera House. We did find that some of the experiences their staff has had can be explained by old flooring, however, we did have to concede that some of the claims were unexplainable. Based on this and our audio and video evidence, we believe the Opera House does experience a certain amount of paranormal activity. 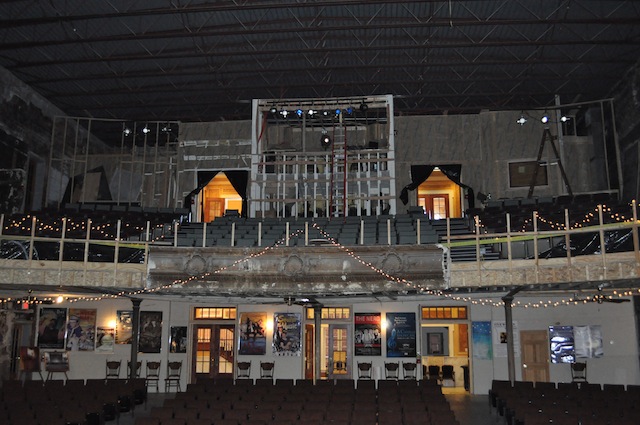 View of theater seating from the stage. These doors are where witnesses see shadow figures walking. 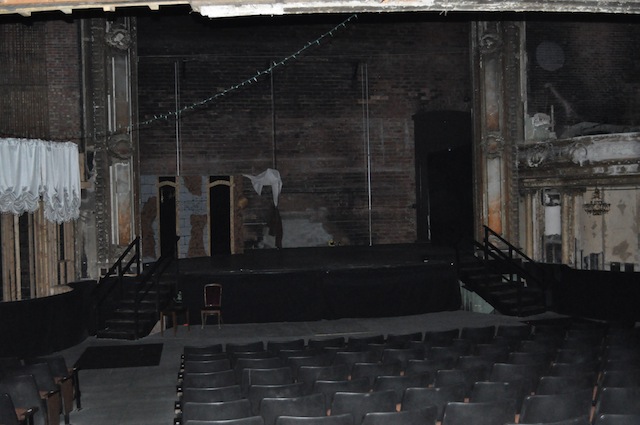 View of the stage where many report fleeting glimpses of shadow figures. The dressing room is located under the stage.

View of the balcony